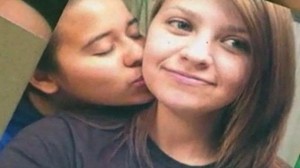 Police recently released a sketch of the suspect in the shooting of two young lesbian women in Texas last month.

The girls were found on June 23 in tall grass at Violet Andrews Park in the small town of Portland, Texas. Both had suffered from close-range gunshot wounds to the head. Mollie Olgin, 19, was pronounced dead at the scene. Mary Kristene Chapa, 18, is in the hospital in serious but stable condition.

The girls had been dating since February, according to friends, and had been spending time in the park before seeing a movie. The Portland police chief has repeatedly told press that the attack showed no signs of a hate crime, but gay and lesbian communities have united to mourn regardless. Vigils were held this and last week in cities including New York City, San Diego, Seattle, El Paso, and Washington, D.C. in memory of Mollie and in honor of Kristene, and they continue to be scheduled throughout the United States.

“What happens when tragedies occur, whether it be in the middle of Chicago, in the middle of New York, or in rural Texas, that affects us here today,” one vigil attendee told GLAAD. “The way we combat these tragedies is to stand up and shout, ‘this is unacceptable.’”

Kristene’s family has created a fundraising page to help cover her medical expenses. To help, consider donating to Kristene’s medical fund or attending a vigil in your area.