Revel & Riot is incredibly excited and proud to announce a new t-shirt collaboration with our favorite band in the world, Tegan and Sara! Tegan and Sara have both been outspoken advocates of LGBTQ equality their whole lives. As sisters and out, gay performers, they have set an example in the music industry of honesty, pride and  activism for over 12 years. They have also supported Revel & Riot since the very beginning.

The Tegan and Sara “Animals” T-shirt features Tegan and Sara, a turtle, fox, koala, penguin, and a dragon fly all labeled with their latin names. The text at the bottom reads “Gay behaviour is found in over 1500 species. LGBTQ equality now.” 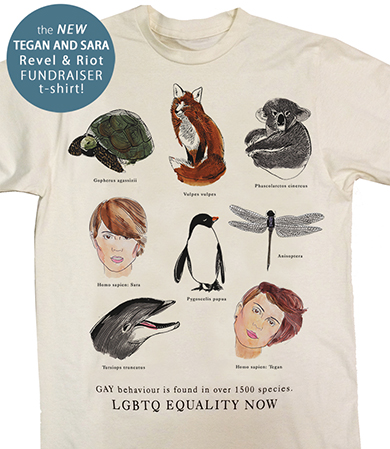 The shirt is about being born gay, and living your life as naturally as would a koala, a dragon fly, a dolphin — all animals that have been seen in nature to be gay. In fact, scientists have discovered that over 1500 species on this planet exhibit gay behaviour. LGBTQ homo sapiens are the only species that are punished, persecuted and repressed for being who they are.

For now, the Tegan and Sara animals shirt will be for sale at Tegan and Sara shows, and in the Revel & Riot store. The design has been printed on an organic, natural colored cotton t-shirt with water-based inks for an extra soft feel. All proceeds of the sale of the shirt go to benefit the work of Revel & Riot.