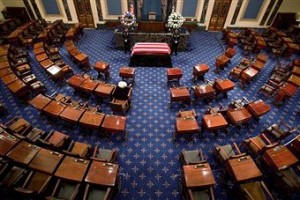 Yesterday, the Virginia senate voted 22-18 in favor of legislation that lets private adoption agencies discriminate against LGBT people. The Republican Governor, Bob McDonnell – has already said he will sign the bill into law.

This is a huge step back for LGBT people all over the United States, not just Virginia. The only other state that enforces a law like this is North Dakota, but the attention will likely incite other homophobic, anti-gay politicians to bring similar bills to the table in their own states.

Even two state Democrats, Charles Colgan and Phillip Puckett, voted with all 20 Senate Republicans in voting for the “conscience clause” legislation.

The creators of this archaic, hateful bill back it up by claiming that the law protects the religious rights of agencies that work with the state to provide adoption services. This means that in Virginia, religion has control of state sponsored programs – an idea that is as frightening as it is undemocratic.