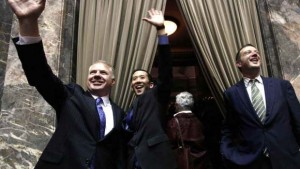 Last evening, the Washington state Senate voted 28-21 in favor of the bill that would legalize same-sex marriage. Bill SB 6239 passed with bipartisan support of 24 Democrats and four Republicans, and will now make its way to the House, where it already has enough support to pass.

“We thank Majority Leader Brown, Sen. Murray and the bipartisan coalition of senators who stood with us today in the name of equality. The overwhelming support we’re seeing from businesses, labor, faith communities and people all across the state is a testament to the momentum of this movement and sensibilities of Washingtonians. Volunteers from every part of the state have contributed thousands of hours of their time to make today possible, and we thank them for their commitment to this issue.”

Opponents of equality in the state have already sworn that they will file a challenge, which can’t be done until after it is passed by the full Legislature and signed into law. If opponents are unable to gain enough support and their efforts fail, gay and lesbian couples will be able to get married this June.