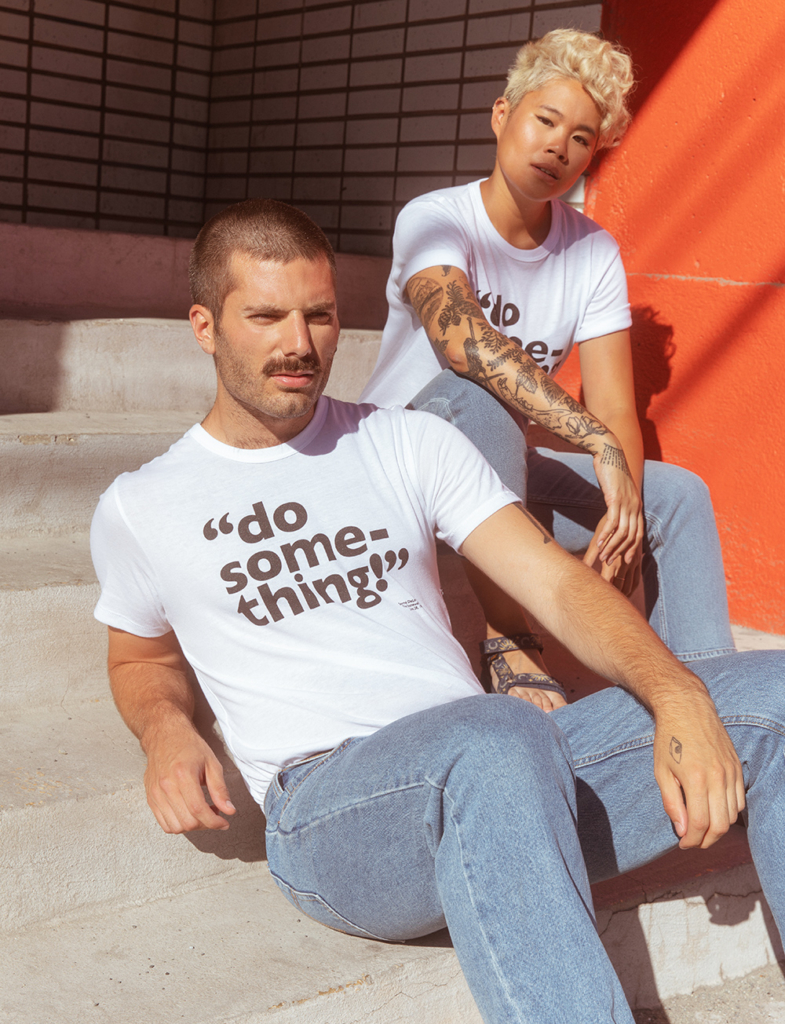 Announcing the new Revel & Riot “Do Something” t-shirt! This t-shirt commemorates the upcoming 50th anniversary of the Stonewall Uprising – the rebellion that launched the modern LGBTQ rights movement in the United States. A portion of the proceeds of the sale of the “Do Something” shirt will go to organizations fighting for the rights and well-being of our LGBTQ elders. Pre-order the Stonewall t-shirt now in our shop!

In the early hours of June 28, 1969, there was another routine raid on The Stonewall Inn in NYC, a Genoese mafia-run gay bar in Greenwich Village. Fed up with police violence and incessant persecution, some people inside Stonewall refused to show their IDs or identify their gender; it was illegal to be gay and illegal to not dress in “gender appropriate” clothing. The police decided to detain everyone. Those who evaded arrest began gathering outside the bar. Soon a crowd had formed – quickly surpassing 150 people, tension and anger building. People shouted “gay power!” and sang “We Shall Overcome.” Pennies and beer bottles were thrown at the cop cars. Butch, lesbian, woman of color Stormé DeLarverie struggled and complained that her handcuffs were too tight and was beaten in the head with a billy club. Bleeding, she shouted and demanded of the crowd: “do something!” The explosion that followed was the Stonewall Uprising and the start of the modern day gay rights movement.

The crowd overturned police wagons, threw garbage and bricks. When the cops retreated inside the bar, it was set on fire. The ten police officers were outnumbered by a crowd of 500-600 people. The next day the gay community returned and the uprising continued on the street in front of The Stonewall Inn, thousands of supporters showed up to face hundreds of police. One year later, Christopher Street Liberation Day was held on June 28, with simultaneous Gay Pride marches in Los Angeles and Chicago, these were the first Gay Pride marches in U.S. history. The next year, Gay Pride marches took place in Boston, Dallas, Milwaukee, London, Paris, West Berlin, and Stockholm.

Today the Stonewall Inn is a National Historical Landmark.

“You’ve been treating us like shit all these years? Uh-uh. Now it’s our turn!… It was one of the greatest moments in my life.”

We all had a collective feeling like we’d had enough of this kind of shit. It wasn’t anything tangible anybody said to anyone else, it was just kind of like everything over the years had come to a head on that one particular night in the one particular place, and it was not an organized demonstration… Everyone in the crowd felt that we were never going to go back. It was like the last straw. It was time to reclaim something that had always been taken from us…. All kinds of people, all different reasons, but mostly it was total outrage, anger, sorrow, everything combined, and everything just kind of ran its course. It was the police who were doing most of the destruction. We were really trying to get back in and break free. And we felt that we had freedom at last, or freedom to at least show that we demanded freedom. We weren’t going to be walking meekly in the night and letting them shove us around—it’s like standing your ground for the first time and in a really strong way, and that’s what caught the police by surprise. There was something in the air, freedom a long time overdue, and we’re going to fight for it. It took different forms, but the bottom line was, we weren’t going to go away. And we didn’t.